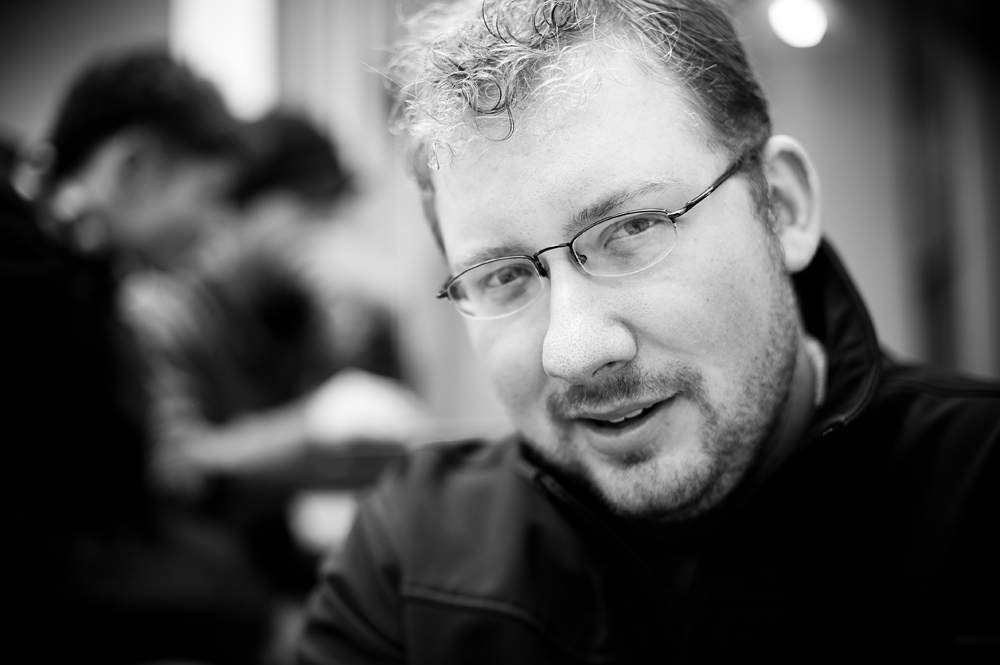 This was taken the first time we had met face to face. November of 2008 in Chicago. I think we were in a Dunkin’ Donuts. There was no doubt back then that I would take your photo when I met you for the first time. Now I’m a little more calculated. I have a feeling this post will ramble, but I’m not making any apologies. Apologies don’t mean a lot when you’re not here to hear them.

I met BJ on Livejournal. I haven’t been active there in years so I’d have to really go back and sift through old entries to pinpoint exactly when it was we began to follow each other. I’d guess sometime in 2006. Back then there were a lot of photographers using it to blog. I’m sure that was the initial draw. BJ had gotten serious with his photography maybe a year after I had. I had a slight advantage in experience when it came to photography over him. In raw talent, BJ closed the gap with me, but he always treated me like I had more of a mastery over things than I did.

When we first met he was living in Michigan where he’s from. He worked for a summer boarding school for artsy kids. My understanding was that he was sort of like a dorm RA/camp counselor type for the high school aged kids. He was close enough in their age bracket for them to think of him as a friend and old enough I guess to get hired for it in the first place. When I moved to Chicago he was still working there, but it was drawing to an end. So as his time freed up Melissa and I had him come to Chicago for weddings and run our photo booth and assist us. I’m not sure how many weekends he occupied our guest room, but his integration into both our lives and business was seamless. We all got along. He had a great sense of humor, and we just seemed to look at a lot of things in life the same way. I’m not sure if I’ll ever really have a male best friend – but for awhile BJ was the closest anyone had gotten.

When we decided to move to Portland I suggested to BJ he consider moving there as well. It wasn’t something I’d ever thought he’d actually do. But right away he seemed super interested and seriously considering it. There had never been any promise on our part that we’d be able to provide him work – we were going into a big unknown ourselves. Maybe there ultimately was some misunderstanding on that front. I’ll probably never really know.

Despite our less than auspicious beginning in Portland, the first few months having him there were awesome. I have very fond memories of BJ and I exploring Portland late at night with our tripods and cameras. Slowing down life to let the light in. There were a lot of laughs, a lot of great photos, and good conversations. Unfortunately the longer we were there, the bleaker our situation with the business was. BJ’s money quickly ran out just like ours, and he was faced with making some decisions on what to do about it. It was a stressful time for all of us. I know I probably wasn’t fantastic to be around when money was a constant worry. BJ seemed to slip into a pretty deep depression, maybe that was his way of dealing with it.

And then there was Andrea. I’m not sure if it was the circumstances, the timing – or maybe she just hated me from the very beginning. We however never got along. I forget the specifics. She had come back to Oregon for a while and BJ wanted a relationship with her. I wanted to be friends simply to keep things strong with my friendship with him. It seems like a lifetime ago – but without hashing all of the specific gory details of the demise of the friendship it came down to religion. Andrea had it, BJ decided to get it, and Melissa and I aren’t the sorts who want it.

I will just say that I actually have lots of religious friends. For some reason though this seemed to be a huge stumbling block. It was the first time in my life I felt really judged by a friend so completely. It’s also the first time I’ve ever seen someone’s personality change at a frighteningly abrupt pace. The term “brainwashing” seems harsh, but even looking back it still feels like that to me. As we faced problems suddenly it was no longer just BJ making decisions, but the church he was a part of. Ultimately things became so strained that it was uncomfortable being under the same roof with him. And it wasn’t because we were having any blow out fights, but because he was going out of his way to avoid seeing and talking to us.

The final straw was when he told Melissa he was getting married and wanted us to photograph the wedding. Usually, it’s a pretty high honor when a friend asks me that (especially a photographer friend). However, when that friend’s fiancé hates you it feels incredibly awkward. I think it was when I was insistent that we all sit down and clear the air (and their ultimate refusal to do so) that was the final nail in the coffin of our friendship was driven in. We did eventually have a blow out yelling match. It was a frustrating moment in a never-ending string of frustrating moments I experienced living in Portland. Portland for me was the land of never-ending disappointment and frustration.

And just like that, it was over. I’ve had my share of friendships end in my lifetime, for a variety of different reasons. A lot of the times it can be my fault for taking things so seriously so often. This one could have been my fault too – but I remember the night of the yelling match pretty well. And it was like I was having an argument with a stranger. The person I had been friends with wasn’t who he was anymore.

The end was in a way kind of a peaceful thing. There was a good reason for it, and I had closure. I was ready to move on. I didn’t hate him or have any ill will towards him at all. I think it was so easy to just move on because he had in fact changed so drastically that it wasn’t like ending a friendship with someone and feeling remorse that the person you are friends with is just doing their thing without you in their life. He was actually someone completely different. So we went our separate ways, and by all accounts, he seemed happy from what little I heard about him after. We had a couple of mutual friends. Melissa and I had both been blocked on all of his social media. I’m not exactly sure why – I had made no attempt to reconcile with either of them and wouldn’t have. Anyways – it was what it was. That was the summer of 2010.

In August of 2012, he messaged Nikki with a bizarre request for her to remove any “modeling” images he had taken of her from off the internet. Nikki had never modeled for him. The only photos she had of herself that BJ had taken were images from across a table a breakfast we went to in Chicago. Odder still was the timing of this request – about the same time I had posted images of Nikki I took in LA. Nikki was a friend I met through BJ and am still close with. I’m not exactly sure what that was all about. At one point BJ had done a lot of photoshoots of models (ironically what I’m working on now), and I’m sure Andrea took issue with that for whatever reason. He eventually months later sent her a message apologizing for his behavior, but it was a strange exchange.

In February of 2014, he added me back on Twitter. I never added him back. I always figured it had been some mistake on his part and not a genuine attempt to reconnect.

Every so often I’d look at his work. He had moved to NYC with Andrea presumably to support her Broadway goals. His work seemed to be very strictly restricted to weddings and “wholesome” pursuits. I forget when or exactly how I found out he had cancer, I think it must have been through his blog. It felt a bit surreal, but I never reached out to him. I wouldn’t have really known what to say. I was still an agnostic. Still felt that he’d likely judge me for my lack of faith. Still figured Andrea would hate me for whatever reason she hated me in the first place. So I never reached out.

And then a few weeks ago Melissa read about his death from something another photographer we mutually knew had posted. He’s the second person I’ve found out has died due to something we’ve read online. First my father, now BJ. BJ was 30 when he died on July 6th.

Melissa was super upset by it. A lot of it I think had to do with how young he was and how suddenly it all happened. I guess he had known about his cancer for a year. At least that’s what the obituary told me. Me? I don’t know what I feel. I feel kind of blank about it. Maybe a bit angry. Angry that he had been a part of my life, and developed judgment and contempt for me. Ultimately I feel like if I had any thoughts of me after our friendship ended it was him believing I was someone I am not. Having characteristics I don’t have. That I was inherently not a good person. And I’m angry that I learned about his death online. Maybe it’s not that strange of an occurrence anymore, but there were a good number of people who could have let me know before reading about it.

When a strong friendship ends for me it has always felt like death. Only when you die loving someone those feelings of warmth are the last memories you associate with them. When a friendship ends two people have chosen to die out in each other’s lives. It can be a sadder thing than physical death because usually, people don’t willfully choose to die. Maybe I’m not making any sense. But I want to write something about it. At one time BJ had been a great friend to me. He was a pretty awesome photographer.

As I was proof reading this, and thinking if what I needed to say had really been said this new song by Death Cab called Binary Sea came on. The second verse seemed appropriate.