Disclaimer: these experiments were conducted in mid 2015. This information will not hold true forever. Oh and for those of you from the “TL; DR” political party – here’s this entire thing summed up in one sentence:

For the longest time I’ve been meaning to write something on the topic of image quality when it comes to social media. Now without getting into the artistic merits of some of the photos my model friends post of themselves online – I want to at least touch on the concept of branding. As a model and as a photographer the images that we create are our brands. If we’re in this to make money (and I’ll assume that you are), the photos we create and how they are displayed are representative of ourselves. Now I’m not suggesting there isn’t a place for those duckface shots you took on your selfie – stick, this is more about how to get the images displaying at their optimum online.

Now as a model it’s really in your interest to be knowledgable at least in the output of digital photography, so your images displayed look their very best and do not turn into pixelated garbage.  Generally speaking, most photographers refer to the finished JPEG as a high resolution image. That is the image that is generally taken from a RAW file format, edited however it’s edited, and then saved into a large JPEG. Nowadays those finished images will be over 4000 pixels on the long side.

Most websites (especially social media) are not utilizing high resolution images because they are too big, both in resolution and file size to be effective. As an example the images on my website are 1000px long, and even optimized for Retina displays they’d be 2000px long – definitely not taking advantage of the 6016 pixel long edge my current camera of choice can produce. However it is important (I think), for models to have high resolution copies of their images so that they can be printed if needed, and or resized however they need to be for whatever the application. This sort of safeguards you for the future. Not all photographers automatically provide high resolution images, some will downsize them for their own reasons. Without getting into that – you should at least know what you’re getting before you agree to a shoot (especially trade). Will you be providing maximum resolution JPEGs, or do you downsize them? That’s a good question to ask.

First let’s talk about Instagram. I’ll keep it brief because Instagram for the most part has been pretty straightforward from the get go. In the beginning Instagram first utilized 612 x 612px images. It “upgraded” once to 640 x 640px, and just recently has gone to a much higher resolution of 1080 x 1080px. Therefore, currently your images that you’re uploading to Instagram should be at least 1080px on the long edge. Everyone seems to have a bit of a different method for getting their non-camera phone stuff on Instagram. Personally as a Mac user with an iPhone, I find the easiest for me is to just text myself (or Airdrop) images. Then I use Squaready to put a white border on it because I hate cropping my images to actual squares. What size are my photos that I send to Squaready? Well to make it easy on myself across the board my current web optimized image size I use across the board for social media is 2048px on the long edge. The only exception to that is what I post on my WordPress based blogs. If you’re a blogger you should find out what your blog resolution is set to, and that will dictate what you need to size your images to.

Facebook. To preface this, it is difficult to get an image to look decent on Facebook. The day I wrote this my friend Morgan and I were having a discussion on the topic, and I was telling her about some things I’d been noticing as of late. Now when I do a shoot I personally get excited about it and want to share some of the results right away if I can. Usually I’ll send them either via text message or Facebook message, however I’ve been communicating with my subject. Ultimately I provide galleries to my subjects on my proofing site where they can download the images in a high resolution format, but in the beginning I’m sending web optimized images (specifically 2048px long edge ones). Why 2048? Facebook has had a page up in their help section that has been edited on occasion with their recommend image sizes. I’ve tried the 960 and they just look bad to me, so 2048 has become part of my workflow. 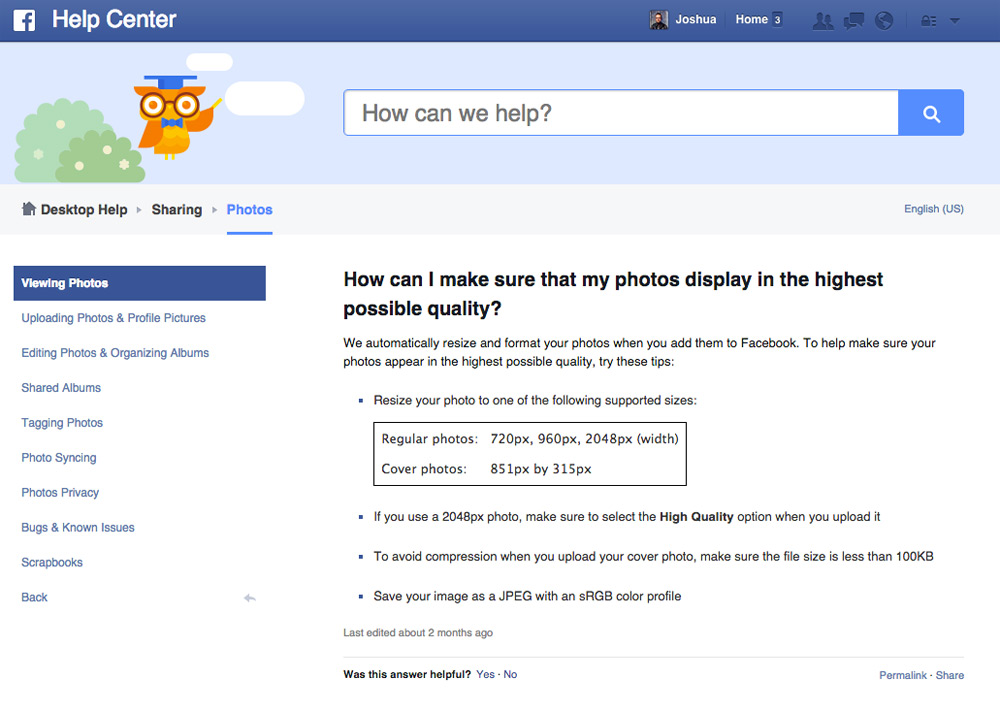 The most important thing here that really Facebook should be boldface highlighting is the word “compression.” Compression is what takes an awesome photo and makes it look like pixelated garbage. Basically Facebook wants the byte size of the image to be as small as possible. The more detailed an awesome the image is, the harder it is to shrink down into something that Facebook doesn’t compress. Facebook is usually the ugliest culprit when it comes to image compression so I did a little experiment to illustrate what can happen to an image when Facebook gets their hands on it. Since Morgan brought this up with me, she’ll be our test subject. The maximum resolution control image is here. This was taken on a Canon 5DMKIII at 800 ISO. It is 5760px on the long edge. I added some grain to it in post production because that’s how I usually roll.

Control image after going through my standard resize to 2048px. I have yet to discover the exact tipping point where Facebook isn’t further compressing it.

Control image as it looks uploaded from my computer on Facebook. Facebook keeps the long edge at 2048px but has reduced the size from 1.9MB to 292KB.

Control image texted to my phone via iMessage and then uploaded to Facebook (image auto enhance is off). Facebook changes the long edge to 960px and reduces the file size to 43KB.

Control image texted to my phone via iMessage and then uploaded to Facebook (image auto enhance is on). Facebook changes the long edge to 960px and reduces the file size to 44KB.

Control image texted to my phone via Facebook Messenger and then uploaded to Facebook (image auto enhance is off). Facebook changes the long edge to 960px and reduces the file size to 43KB.

Control image texted to my phone via Facebook Messenger and then uploaded to Facebook (image auto enhance is on). Facebook changes the long edge to 960px and reduces the file size to 43KB.

As a side experiment after I texted the Facebook optimized control image to myself I then emailed it back to myself. The original image was 1.9MB, and the image I received back was 229KB. I repeated the same process with Facebook Messenger as the sending source with the same exact results. The images coming from the iPhone are severely compressed. I then uploaded that to Facebook just for kicks and again the long edge was changed to 960px and 45KB. Looks just the same as the rest.

The basic result of this experiment is: DO NOT UPLOAD PHOTOS TO FACEBOOK FROM YOUR PHONE. If you want your images to look their best download them to your computer and then upload them to Facebook. Here’s two other scenarios to think about:

1. Photographer sends you a preview via iMessage, and you then download that to your computer. When I experimented with this I sent my initial image that I resized from the control down to 2048px that was 1.9MB. When I downloaded it via iMessage on my laptop (it originated on my iMac), it compressed a tad to 1.8MB. Looked identical to me though.

2. Photographer sends you a preview via Facebook Messenger, and then you download that to your computer. When I experimented with this my 2048 long images that Facebook had compressed to 295KB were further compressed to 246KB when I downloaded them. No idea why. They look pretty much the same, but I can’t account for that.

When it comes to Facebook, in order for the images to look their very best you need to be downloading them via email or from a proofing site for the best results. Things still however can look pretty decent with those 2048px images that come in messages as long as they aren’t being uploaded on a phone. 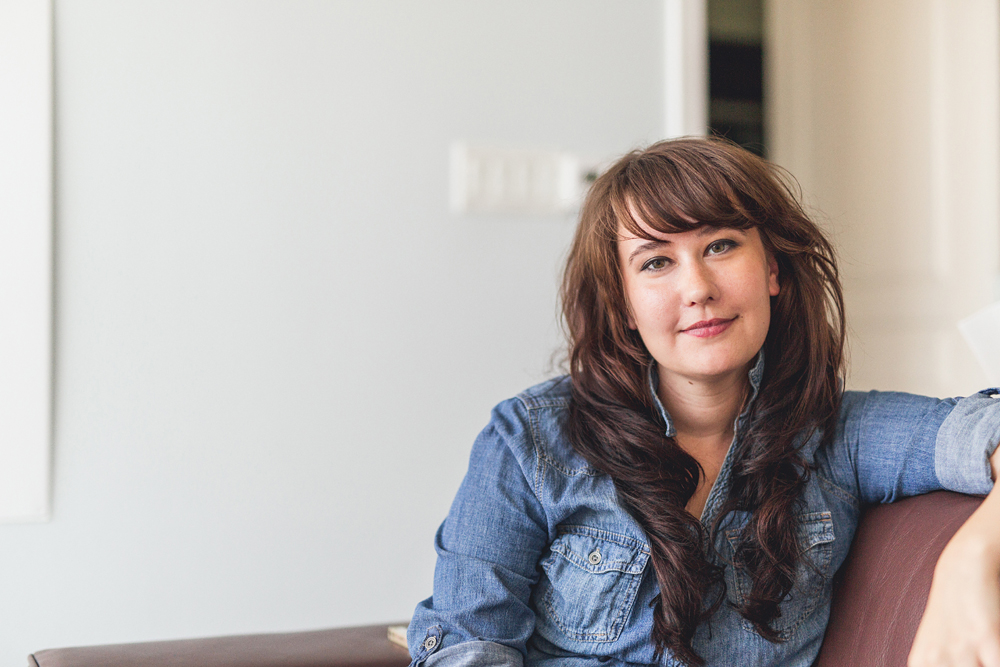 And this version of the Morgan photo is how WordPress renders her at 1000px, proving that WordPress is a great place to display your images for a professional site. Thanks for lending us your face.

DO NOT UPLOAD YOUR IMAGES TO FACEBOOK FROM YOUR PHONE

PS – If you’re looking at the images here and just seeing the obvious size difference I’d suggest training your eyes to look a little harder. Sure the general public might not notice the quality difference, but people in the industry should! Just my opinion of course.