the fabric of respect

The other night I was up late in bed watching the original Battlestar Galactica when I got a message from Ali regarding a post of my latest highlights from BAPR II. She asked me what image from that post did I think she loved the most? I drew a blank, but when she eventually told me it didn’t surprise me that she loved the image of Reno in Las Vegas with the flag. That image was a series of a few I had taken that night that ultimately for me were both a success and disappointment for a few different reasons. It reminded me that I had intended to tell a story about the moment that happened that night leading up to that photo, as well as telling the story about the photo itself. There is a lot wrapped up in this image for me.

It was our second day of shooting for BAPR, and we had split the day to include some night shooting on the strip. The Las Vegas strip is a strange place – and at night there is a lot of ambient light to work with. There are also a lot of people in a variety of altered states milling around. Sometimes it’s colorful and entertaining, and sometimes the undertones are a bit darker.

Reno seemed to walk ahead of the group a bit that night. I’m not sure if she just liked walking solo or that her long legs were just covering more distance than the rest of the crew. As she was ascending on an escalator to the sky bridge a few paces ahead of us, a man on the opposite descending escalator reached out and touched her hand. Her instant recoil was jarring. I hadn’t been paying that close attention to the other side of the escalator and whoever it was that touched her got lost in the crowd fast. It was a very fast and subtle act, but it instantly burned into my mind.

First and foremost deliberately touching a stranger in public in this context is wrong. You may be reading this and think that just because it was a touch of the hand and did no physical damage that it’s not a big deal. But it is a big deal. It’s a violation of her personal space. He had no right to touch her, and while it was just her hand being touched it wasn’t any less a lecherous and unwanted act as it would have been if he had touched a different part of her. What possessed him to do this? Where in his brain chemistry was this act okay? Was it a split second decision? Or did he deliberately plan to touch her the moment he saw her? Was it for the thrill of being able to do it and get away with it? Or was there some twisted reasoning in his mind telling him that she’d appreciate this? I contemplate what the possible outcome this man had intended. Did he think Reno would hop off the escalator and immediately run down after him to exchange numbers? I want to know what is going on in a guy’s mind who does these types of things – because it’s not something I’d conceive of doing.

The second question to this is what is the correct response to these situations? Had the stranger not been egressing in the opposite direction and lost in the crowd maybe he never would have touched her. Maybe. If he had touched her when she was off the escalator then what? I want to yell, “what the fuck are you doing man?” I want to take him down with commando precision. And even if I had that Judo training – is it worth the confrontation? What’s our responsibility to our sisters regarding these instances? I’d certainly physically intervene in a situation if my friend was being physically harmed or at risk… but I always seem to draw a blank when these things happen. And they happen a lot.

Need examples? It’s the guy downtown who passes by me and the model I’m photographing and says, “DAMN YOU LUCKYYYYY!” Or the guy who physically parks his car close to where we’re shooting so he can leer at my subject. The guy who feels the need say to me, “your girl’s hot.” She’s not my girl, I’m married. She’s my friend, and she doesn’t need you to tell her she’s hot. The group of guys cat calling our model as they drive by a deserted road in the middle of the desert (proving that nowhere is safe). All of these various instances are just the examples I witness when I’m out photographing models. What women deal with when they aren’t with someone, or with a group… on a daily basis. I know it’s constant, and it saddens me. What do you say to these men? What’s the quick response to make them actually think – hey if this was my sister, my girlfriend, my mother… would I want some random guy approaching them to stare and inform them of their beauty? Guys this isn’t how you appreciate a woman’s beauty – this is simply you declaring your primal intent. It’s a gross display.

I don’t know what the solution to this is. Is this sort of harassment of women less tolerated now that it was in years past? Is progress being made? Would my thoughts on this subject be different if I had a different upbringing? Is this an issue to other men as it is to me? Are you guys seeing the same things I am? I didn’t grow up in the company of many men. To this day I don’t have a ton of male friends, and the ones I do would never behave in this manner. All I know to do is address my friends and peers who are parents of boys. People it’s on you. I don’t know if this can be taught out of men, but someone needs to start trying. Someone has to stop the cycle.

I’m not sure if the escalator touch had an impact on Reno. She retained her poise. She never even mentioned the incident. She just kept going, and I think that is what women are conditioned to do. She wasn’t rattled, she was seemingly fearless posing for photos in front of a weird crowd of passing bystanders. Even with the flag draped on her – and we’re a country obsessed with their flag like none other in the world. Whatever you do, don’t drop that flag Reno. The image I had envisioned could have been executed better. I could have brought the Olympus and used that image stabilization to get better crowd blur. Or I could have taken the time to do it with flash. I had a ton of photos from this series that all had something wrong with them to me. This one needed more people on the left of the frame. Something about this one stuck with me anyhow. It became the one of the series I went back to. Her downward gaze. The guy with the white visor about to strike some bravado pose trying to steal her spotlight a little. The guy in the cap leering in the direction of her ass. Joke’s on you buddy, the flag is covering what you had to turn around to stare at. For the record the flag never touched the ground, and while I know some would argue that we’re being disrespectful in our use of it I’d ask you this:

When is our country going to start respecting women as much as it does the flag? The fabric of our nation isn’t really fabric – it’s our citizens, female and otherwise, being allowed to walk our streets without being touched or harassed. It sounds pretty basic right? 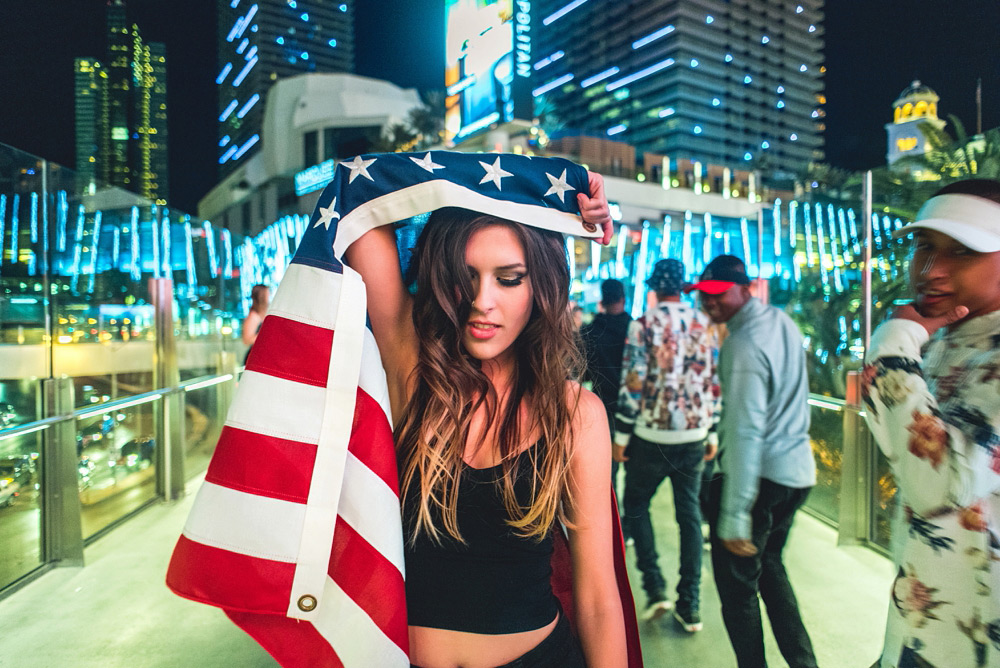 EDIT: So I wanted Reno to read this before I made it a bigger deal. She said that when the guy touched her hand he said, “you’re beautiful.” I think that just makes me angrier. In his mind perhaps he’s thinking he’s doing her a favor, boasting her confidence, complimenting her.