what makes us stronger

A little over a month ago I arrived back from Los Angeles with a head full of thoughts. I knew I wanted to write something about what I was thinking and feeling, but it was just a little too soon I guess for me to fully process what I wanted to say. I’m honestly not quite sure I’m there yet, but I want to say something. Before I can really address what this is all about, I feel like I need to provide a little backstory into the subject of this post, my friend Nikki. Now I do actually have two Nikki’s in my life – this is my friend Nikki who lives in LA.

I met Nikki in October of 2009 about a month before Melissa and I departed Chicago for our new home in Portland. It wasn’t the most auspicious circumstances for beginning a new friendship, but I have always thought you shouldn’t limit yourself from getting close to people even if you know you’ll have to part ways sooner than you’d like. The last night we spent in Chicago we hung out with Nikki. It probably was only the 2nd or 3rd time we’d ever hung out with her. Despite being mugged that same day, she still wanted to meet us before we left Chicago for good. That said something to me. 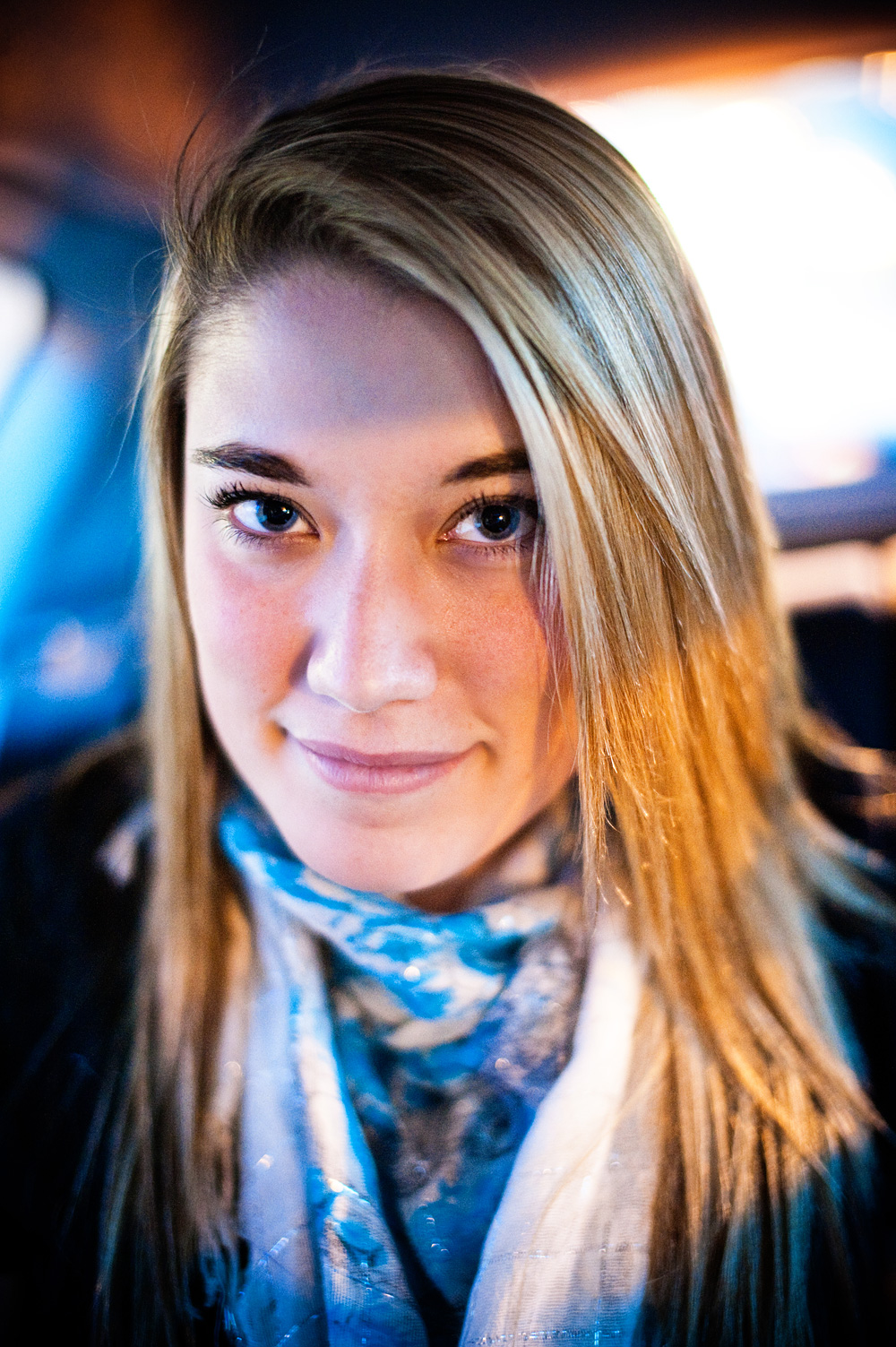 This is the first photo of Nikki I took that I really liked. She was sitting in the backseat of our car a few days before our Chicago exodus. 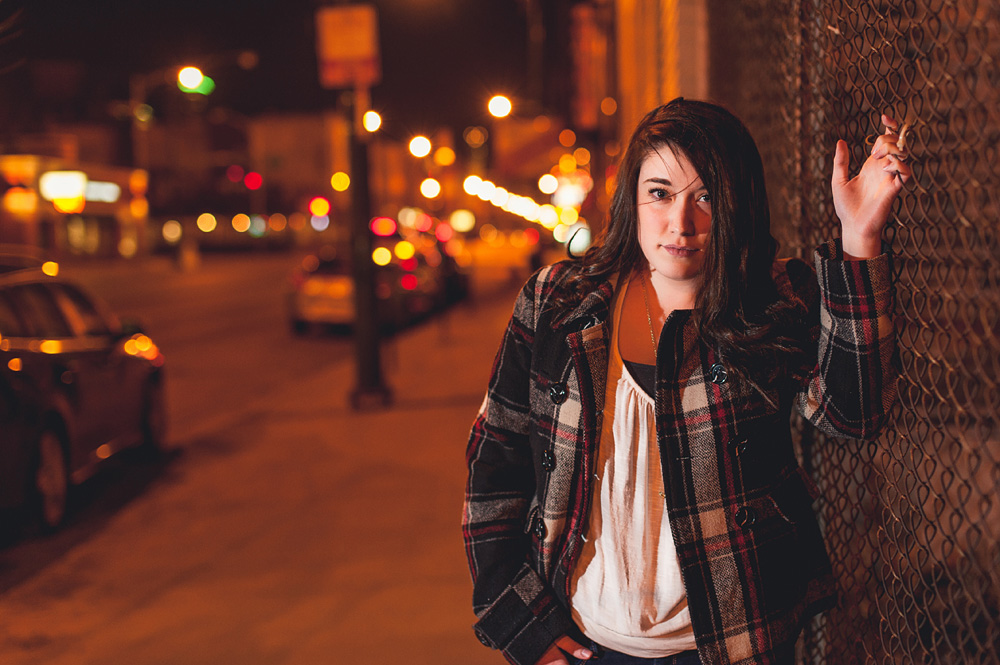 As 2010 unfolded we made a lot of return visits to Chicago for weddings we had booked. Nikki consistently would get excited for us coming back, and make the time to see us. She quickly became the person I wanted to see the most, and even though we really don’t have a ton in common (more now maybe than we did then), it still felt more like we were visiting a family member than it did a person we had only known a few months. 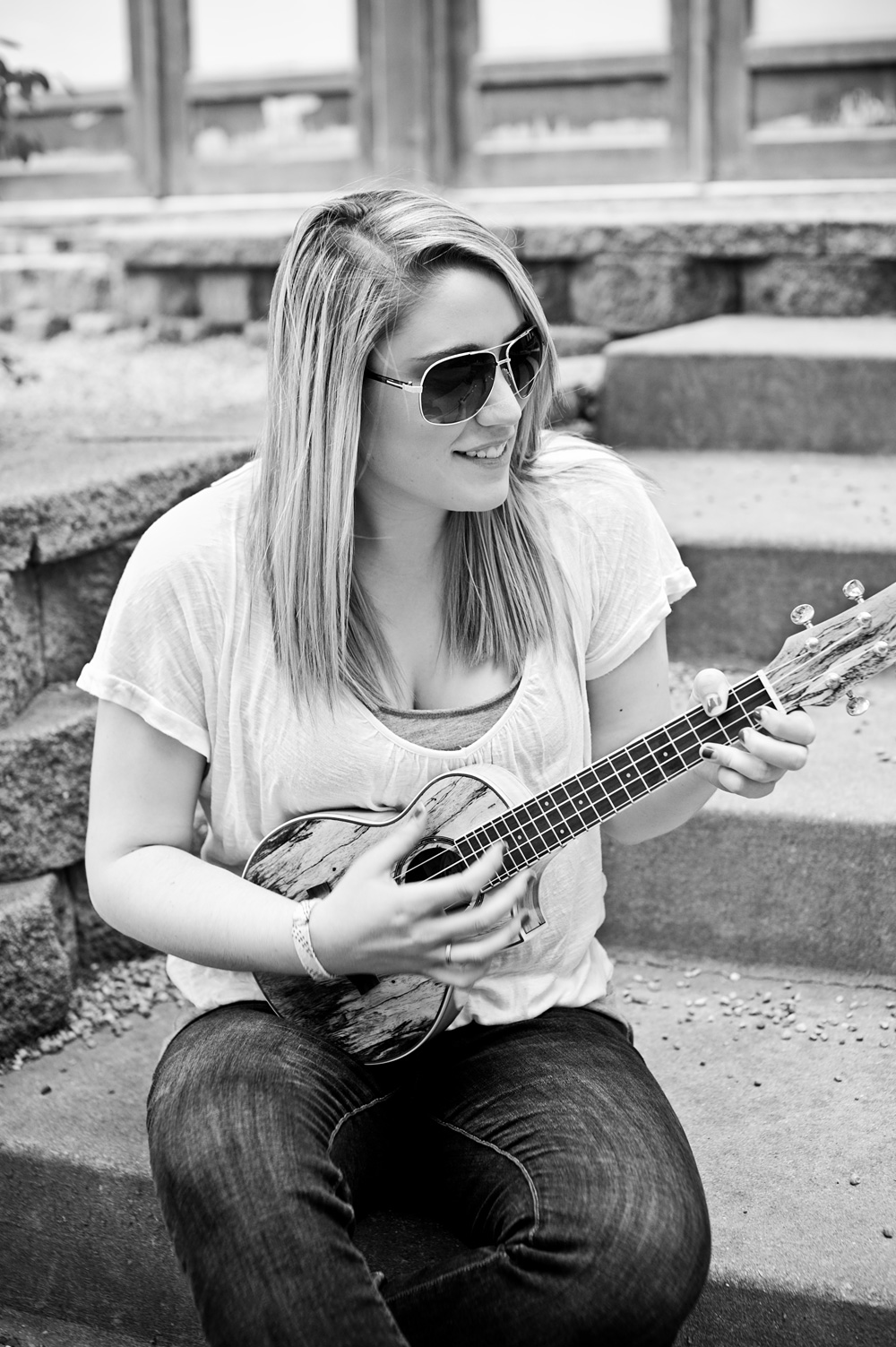 One particular trip back to Chicago I was doing a portrait shoot for a friend and Nikki joined me part way through it. She had rushed to be there from across town, and was a little flustered. She had brought her ukulele with her, and while I knew she had some interest in things musical I didn’t really know if she was talented or not. I jokingly put her on the spot and asked her to play for my friend and I fully expecting her to get nervous and turn me down. She didn’t though, she confidently pulled her instrument out, sat down, and played. It’s not that I wasn’t expecting her to sound good or be talented, but I really wasn’t expecting her to be as good as she is. It was an interesting spark of courage I hadn’t seen in Nikki before. Go listen to her, but then come back to the story. 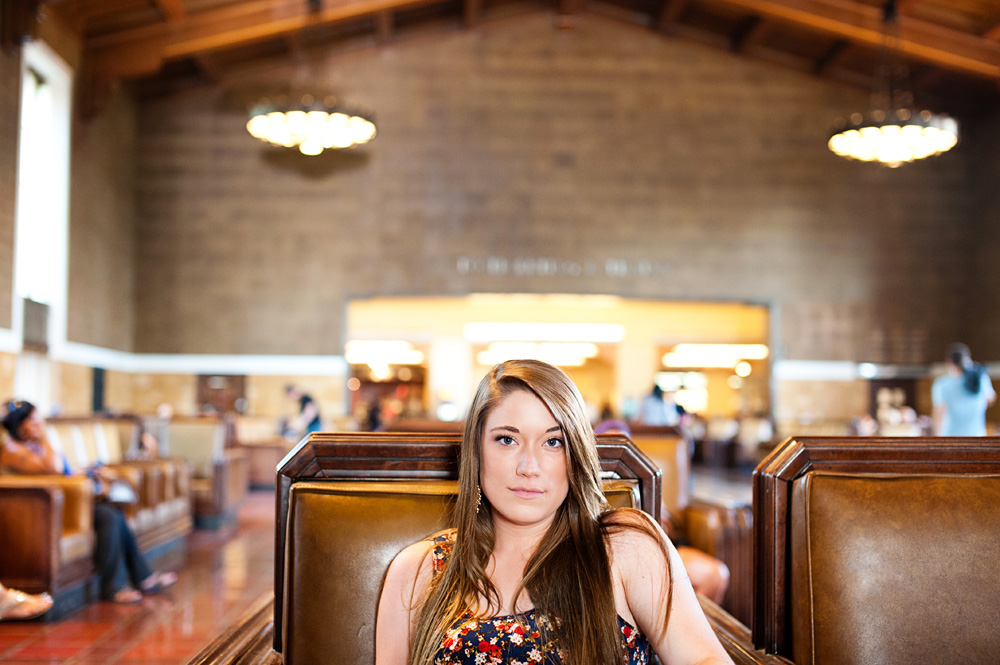 As the months progressed it was apparent that Nikki wasn’t super happy in Chicago. She had a brief stint in Nashville, and eventually much to my own delight ended up moving to Los Angeles a few months after we arrived in San Diego. Finally we had the opportunity to see each other without air travel being involved. This was taken the first time I had seen her in awhile, in Los Angeles’ Union Station. 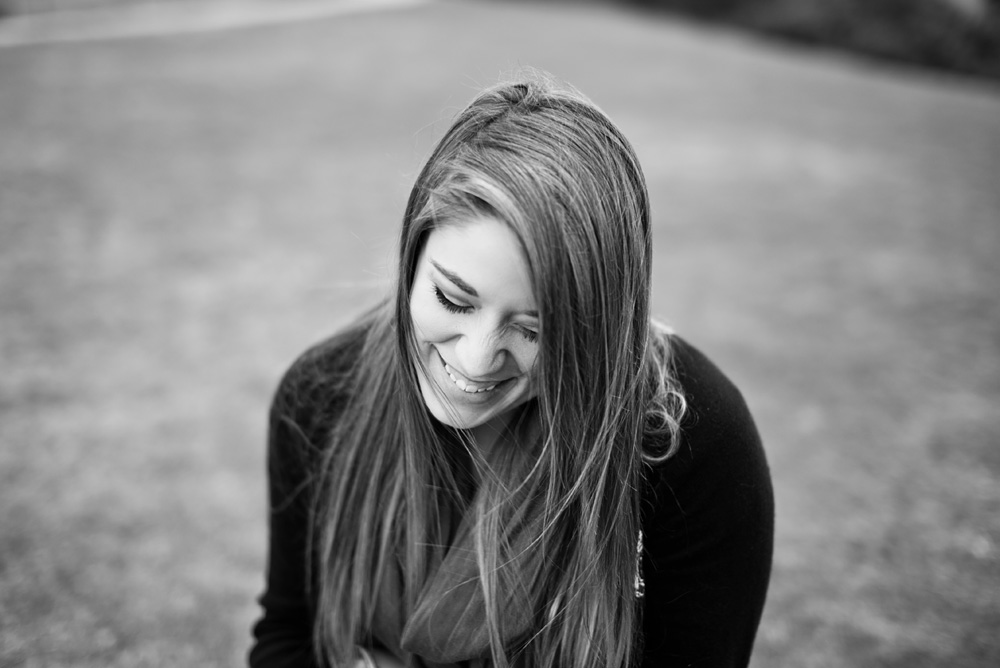 Much like Chicago, when we found ourselves in Los Angeles for a wedding we’d make arrangements to see Nikki and hang out. This was from a visit in October of 2012. It’s one of those images I love because it captures Nikki truly being Nikki. 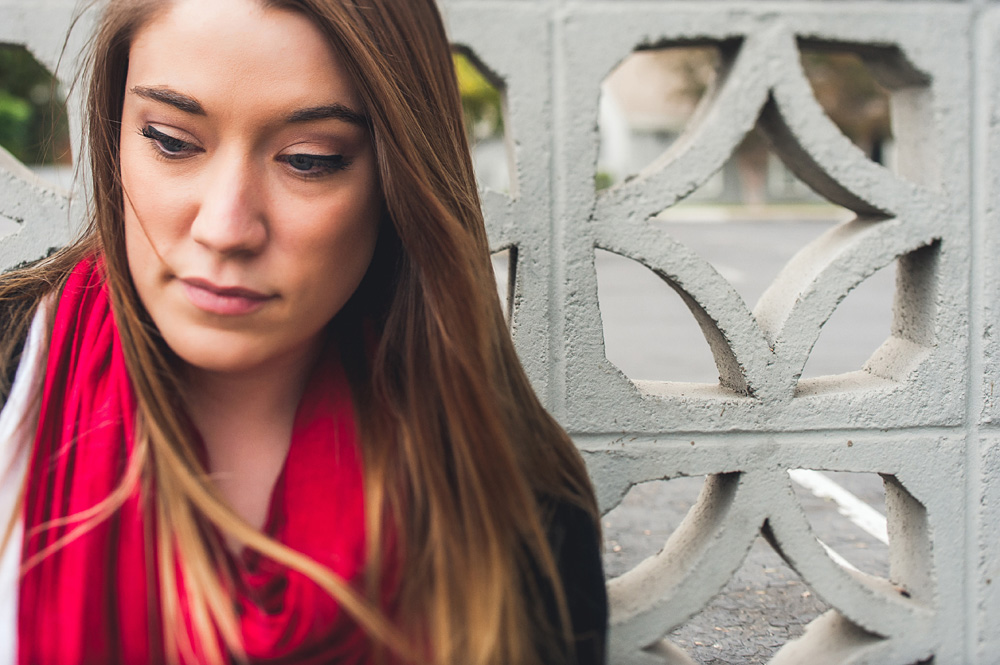 Later that day in October 2012 I took this image. I think at the time I saw it as a neutral expression, beautiful to me because I love neutral expressions. Looking back now with some perspective I see something different.

As a side note maybe a year prior when Nikki lived in Nashville we were having an instant message conversation one night. Since we have a big age gap I probably offer more “advice” than I ought to, but it definitely wasn’t uncommon for me to provide suggestions to her. I forget exactly what the specifics were – but in an instant the conversation went from upbeat and friendly to Nikki being really angry with me. To the point where she signed off abruptly and I was left wondering if a friendship had just suddenly evaporated. I quickly sent off an email – not sure exactly what I was apologizing about, but that I didn’t mean to upset her. She responded the next day revealing to me that she had bipolar disorder and was unmedicated that day. I am the sort of person that tends to overly personalize everything – it was a relief for me to know it wasn’t something I had specifically done. I was glad that she told me – because it got me closer to understanding her. That is an important part of this story: the concepts of communication and understanding. Side note: Nikki was actually misdiagnosed as Bi-Polar. 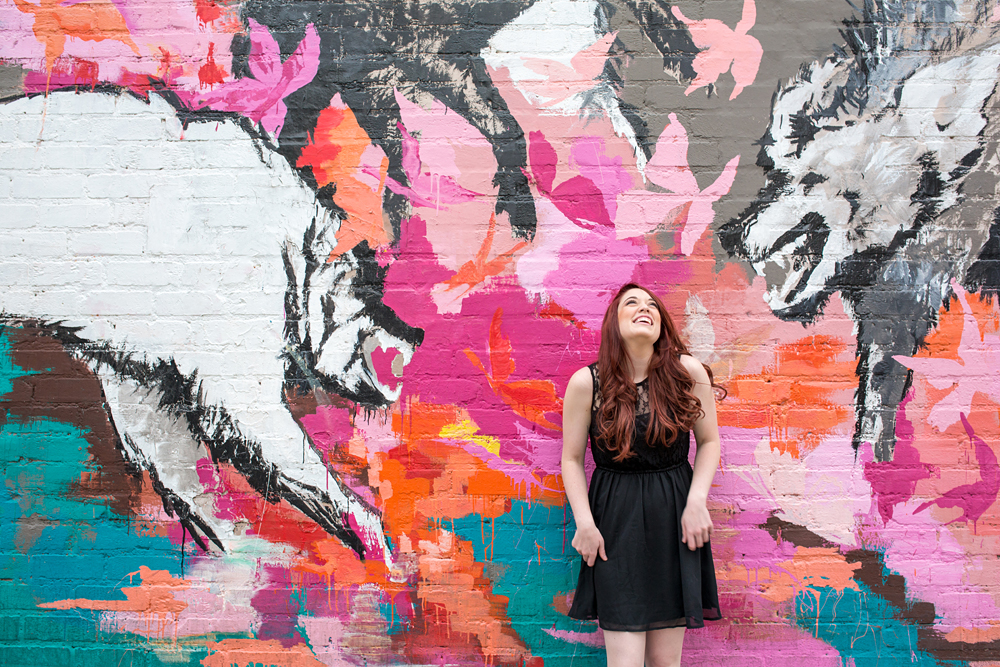 February 2013. We did a shoot in the Art District of LA. This photo of Nikki was taken then, it’s probably my favorite of her. Colorful, candid, seemingly happy. A lot was going on that Nikki wasn’t talking about. She’s the girl that can laugh things off, but the wolves were circling. 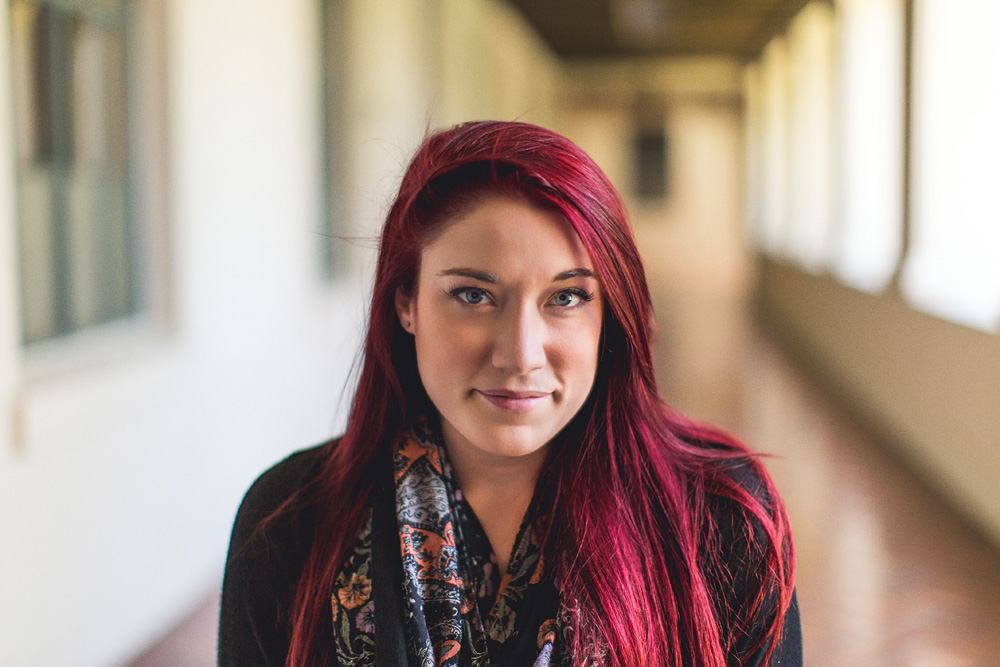 Three months later on a warm day in Pasadena Nikki once again as loyal as ever faced LA traffic to come out and meet up with us for a little bit just to hang out before a photo shoot of mine. 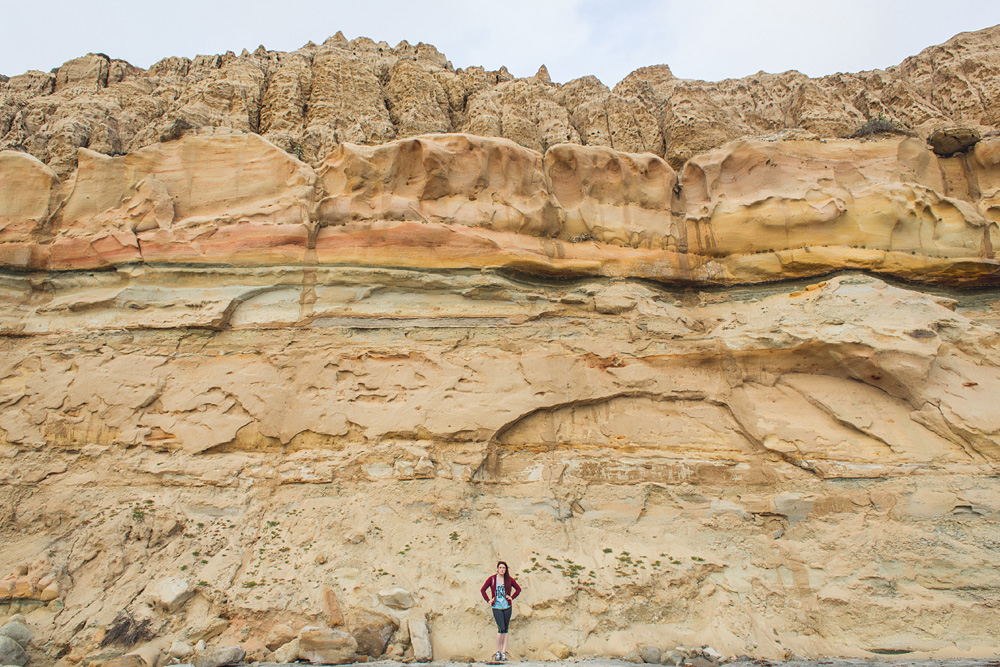 Now we weren’t completely silent the entire time. We had never been the sort of friends who converse daily, which I honestly haven’t had in a long time – but the silence was growing and it was noticeable to me. There were a handful of reasons that I personally attributed to the rift. I could list them out, but ultimately it’s of little consequence. They are the little things that add up to hurt feelings over this or that – any of which could and should have been talked about. Now looking back at it all I was willing and available. Yet the time continued to tick by, and still being connected in social media I saw her seemingly thriving (although she wasn’t) – and I just equated it to Nikki not caring anymore. Me overly personalizing things is something I’m perpetually guilty of, although so much of this new friction between us could have been avoided. 680 days of not seeing each other, with brief contact. When I thought about her it just made me mad. This was someone I had in the past felt a familial connection towards, yet I was angry.

Right around this past Christmas I started to think a lot about Nikki. The situation wasn’t sitting right with me. I was struggling with being a friend that people take advantage of vs. being the friend I’d like to think of myself as. The type of person who doesn’t give up on people. I texted her on Christmas, and she responded in a friendly way, but we didn’t really converse. A few months later I had planned a fun trip up to LA to take some photos with friends. I decided then to reach out one more time and just see what happened. It was very last minute and I expected her to either not respond, or be busy. But she wasn’t, and she came and saw me.

Her hair was different but it was the same big blue eyes, the same smile. Something was different though. In the corner of a noisy Hollywood restaurant we had a talk that put everything into perspective. That’s the part in this story where you’re going to have to take a detour to Nikki’s blog, and read this entry. But then come back, because I’m not done yet.

I guess we should be getting to the part in this post where I tie this all together and I come up with some philosophic point. I still feel like my thoughts are fractured on this. It’s about communication, and it’s about de-stigmatizing struggles. I understand that certain problems like these don’t easily roll off the tongue. They aren’t casual conversation. Most people honestly don’t want to hear about people’s deep traumas. It’s heavy stuff, and the vast majority of us are in a constant effort to remain blissfully unaware. I get why Nikki didn’t reach out to me. But I wish she had. The thing is, I really love Nikki. She’s a unique and amazing person. She’s someone that I feel like years from now I should still know. And even though her distance and silence wasn’t all my fault – I still feel some remorse in being so close to giving up, and just not trying harder. So here is the moral:

Everyone has a struggle going on of some sort. Some are deeper struggles than others. Talk about your struggle with someone. Start a dialog. I’m the first one to empathize with the feeling of being alone in a crowd of people – but someone wants to understand. That much I guarantee.

Listen a little harder. Look deeper at motives and behavior. And if you sense something is wrong, it just might be. If you’re mad at a friend, or you’ve gone without talking for awhile try to separate them from you anger.

Nikki this was a lot of writing about you. I hope you know how much I admire your courage for telling your story. Most of all I admire the honesty it took to realize that things were spiraling and you needed help. It takes a lot of strength to end silence.