The other night Melissa in a fit of rage dumped her diet coke on my open camera bag. Miraculously nothing was damaged, and apparently Thinktank builds their bags to be soft drink resistant. Since I had to take everything out of the bag I sort of took a mental inventory. For the most part since discovering my love for photography I’ve been the type to always carry a camera around with me. At times this has been a bit of a burden, but now I have a really great small camera that I can do just about everything my larger camera can do (for the most part).

Today I came across a photo I had taken of my day to day bag back in 2006. In comparison, it’s interesting that not a whole lot has changed.

* In 2006 I carried around a Nikon D70 with a Sigma 30mm f/1.4 (45mm equivalent). In 2015 I carry an Olympus OM-D EM-5 with an Olympus 12mm f/2 (24mm equivalent), Panasonic 25mm f/1.4 (50mm equivalent), and an Olympus 45mm f/1.8 (90mm) equivalent. The Olympus is a better camera, and much smaller. I also am able to carry 2 additional lenses and it probably still weighs less.
* My bag back in 2006 was some Lowepro Field and Stream model – and it very much announced to the world that I was carrying camera gear. Today’s bag is a Thinktank Retrospective 5. Slightly more nondescript and physically a bit smaller.
* I still carry: sunglasses, kleenex, lens cleaning cloths, lip balm, keys, 2 extra memory cards (then 512MB, now 8GB), ear buds, business cards, pens, toothpicks, and an extra camera eye cup (why do I lose those so easily?).
* What’s changed: I traded the flip phone for an iPhone (forgot to add that in to my updated photo). Ditched the iPad and the little notebook, since both of those functions are handled by the iPhone. I ditched the toothbrush and started carrying gum, maybe that’s more practical? I carry a tiny little Olympus flash that I’ve never used once, but for some reason ditched the little air blower. Maybe I should re-think that space. I also carry two spare EM5 batteries because it’s nowhere near as efficient as the D70 battery was. I’ve also added lotion to keep my hands super soft, and a USB charger for the iPhone which tends to die way too fast. I no longer carry a random 1GB USB drive. I also tend to keep my wallet in the bag as opposed to my back pocket. And finally I have a cable release for the EM5, which I have yet to use. But it’s there.

I guess overall, not much has changed in 9 years. 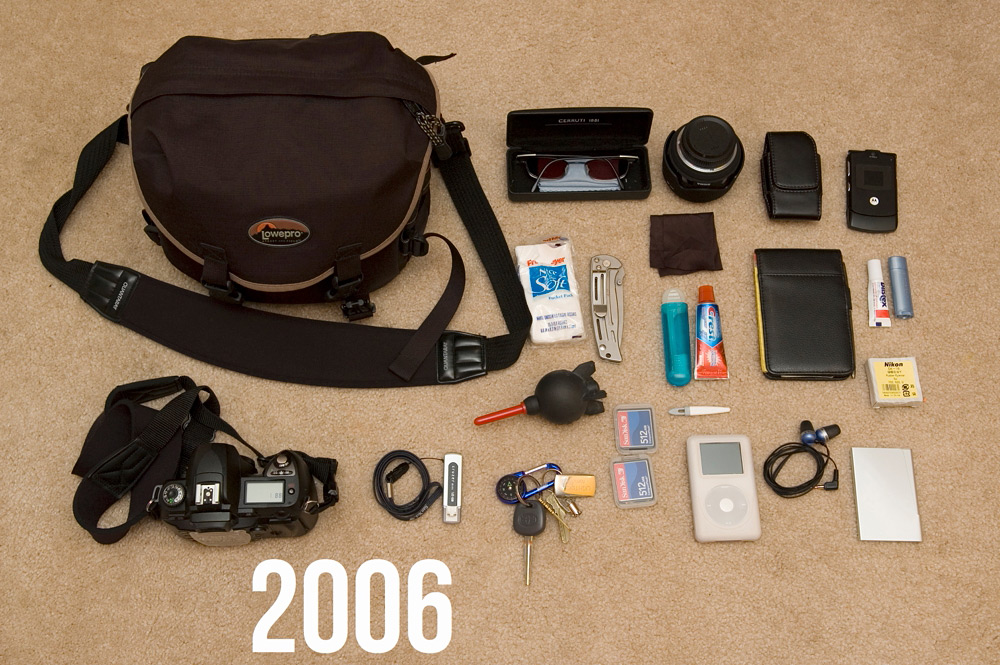 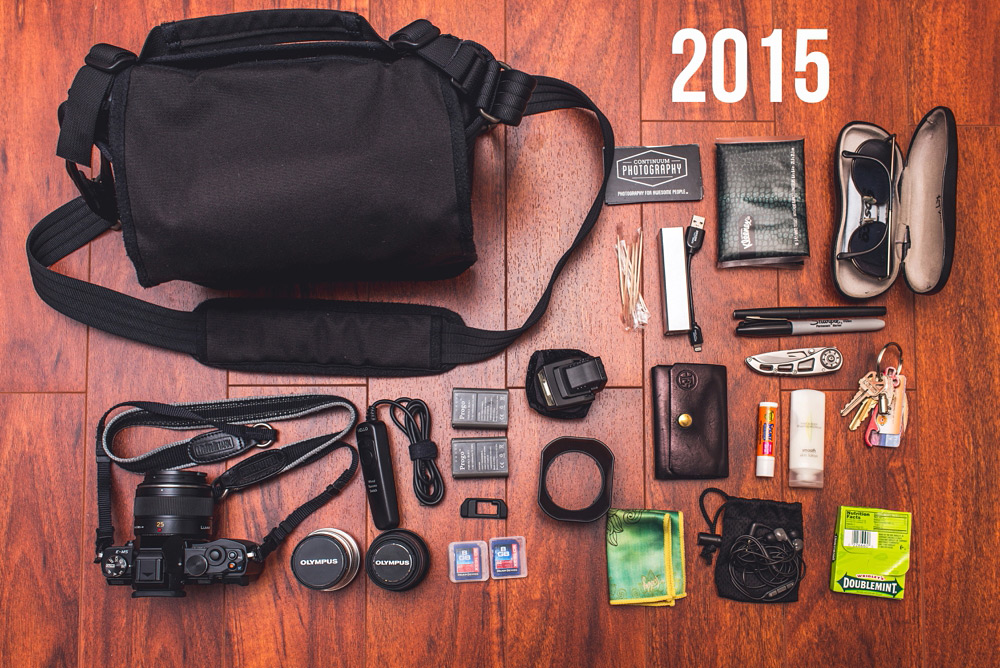